Posted on January 19, 2013 by theplumbersbride

I hope you all had a wonderful and restful Christmas and New Year’s. I would like to take you back to the post Spring Area Natural Gas Issue that I posted on 10/17/2012.  Remember I kept telling Bear that I smelled gas in our bedroom.  The solution at that time was the gas company had increased the odor that day.  The gas company came out and “fixed the problem”.

Well I started to smell gas in the same area of the house.  Again, Bear kept saying he didn’t smell anything.  Seriously!!! Each day the smell seemed to get stronger.   I started closing the door to our bedroom so when we would walk in you could get a good whiff.  Then finally Bear smelt it too.  He went inside, outside, upstairs, downstairs, and in the attic.  However the detector did not get a strong signal of the gas, until he went in the attic and put the detector in the cavity of the wall and at the meter going into the brick of the house.  He had to take the meter apart and then what he found was not good.  Jake and I had to go in the attic while Bear moved the pipe in the wall from outside of the house.  There was no movement.  This was not good because that meant the problem was lower in the wall.  Bear came

inside and said he has to cut the wall.  I was ok with that, however, did I tell you that I have no concept for location when in comes to where pipes are actually located in the wall.  Kind of like some people have no concept of time.  I literally yelled at Bear when I walked back in the bedroom and he was cutting the sheet-rock on my side of the bed.  I am sure you can figure out why I was so upset.  You see we all know that this time next year I will still have the cut sheet-rock….I married a plumber not a drywall man. : )

The wall comes off and he moved the pipe with his hand it was soooo loose.  He said it 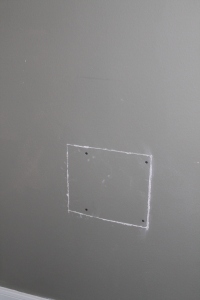 was obviously only hand tightened during the new construction process.  The scary thing to me is how often does that actually happen?  Well I can tell you now that it has officially happened twice in our home.  When the house was being constructed Bear would go by after work to check on things.  They were getting ready to close up a wall in the kitchen and since all of the plumbing was completed.  However a water pipe was just placed together not glued or anything.  Bear repaired it that afternoon.  Back to the gas leak…..He figured out with the new meter installed by the gas company in September that the pipe loosened in the wall because it was improperly installed.

Born & raised in Houston TX Devoted wife of a master plumber and mother of three. One of my favorite quotes is. Those who bring sunshine into the lives of others cannot keep it from themselves.
View all posts by theplumbersbride →
This entry was posted in Gas. Bookmark the permalink.